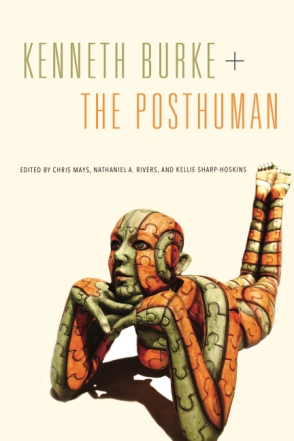 “Persuasively, often surprisingly, this volume transforms Burke to show how his rhetorical project responds to our post/humanist condition.”Rhetoric Review

While rhetoric as a discipline is firmly planted in humanism and anthropology, posthumanism seeks to leave the human behind. This highly original examination of Kenneth Burke’s thought grapples with these ostensibly contradictory concepts as opportunities for invention, revision, and, importantly, transdisciplinary knowledge making.

Rather than simply mapping posthumanist rhetorics onto Burke’s scholarship, Kenneth Burke + The Posthuman focuses on the multiplicity of ideas found both in his work and in the idea of posthumanism. Taking varied approaches organized within a framework of boundaries and futures, the contributors show that studying the humanist theories of Burke in this way creates a satisfyingly chaotic web of interconnections. The essays look at how Burke’s writing on the human mind and technology, from his earliest works to his very latest revisions, interrelates with current concepts such as new materiality and coevolution. Throughout, the contributors pay close attention to the fluidity, concerns, and contradictions inherent in language, symbolism, and subjectivity.

A unique, illuminating exploration of the contested relationship between bodies and language, this inherently transdisciplinary book will propel important future inquiry by scholars of rhetoric, Burke, and posthumanism.

“Persuasively, often surprisingly, this volume transforms Burke to show how his rhetorical project responds to our post/humanist condition.”Rhetoric Review

“This one-of-a-kind collection indicates that there is much to be gained by articulating the work of Kenneth Burke to contemporary debates regarding the posthuman. The received wisdom that Burke is a dyed-in-the-wool humanist, and thus antithetical to posthumanism, is challenged by this strong set of chapters by emerging and well-established scholars. In short, this is not a surface-level engagement but a very serious attempt to rethink both Burke’s concepts and posthumanism through this unexpected encounter.”—Bryan Crable, author of Ralph Ellison and Kenneth Burke: At the Roots of the Racial Divide

“This star-studded collection argues that Kenneth Burke offers a set of flexible tools to help bring into better focus the very idea of posthumanism for scholars in rhetoric. The advantage of this comparative, cross-prodding approach is that it pulls forward a different set of works and concepts from Burke’s oeuvre (e.g., Helhaven, predestination, ‘counter-nature,’ dystopia) than the ones that might otherwise spring to mind, and as such it takes readers deeper into Burke while offering a compelling account of posthumanism’s futures.”—Debra Hawhee, author of Moving Bodies: Kenneth Burke at the Edges of Language

“Kenneth Burke continues to be regarded as a foundational figure for the modern discipline of rhetoric, even though a major reconsideration of his humanism has never really been advanced. Kenneth Burke + The Posthuman changes that. Leading scholars in rhetoric and composition mine Burke’s extensive archive for the authors and concepts that were always on the margins of a traditional humanist reading of Burke even as they informed much of Burke’s thinking. This collection is poised to be a vital touchstone for turning Burke toward the twenty-first century and continuing his role as a leading thinker of all things rhetorical.”—Byron Hawk, author of A Counter-History of Composition: Toward Methodologies of Complexity

Chris Mays is Assistant Professor of English at the University of Nevada, Reno.

Nathaniel A. Rivers is Associate Professor of English at Saint Louis University and coeditor of Thinking with Bruno Latour in Rhetoric and Composition and Literature as Equipment for Living: The Literary Reviews of Kenneth Burke.

The Persistence of Mimesis in the Aesthetics of Burke, Hogarth, and Kant

Prayer as Rhetoric and Performance

Capitalism and Civil Society in the British Enlightenment