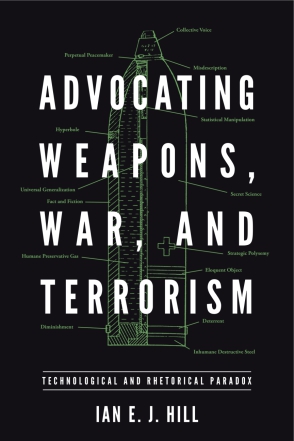 “This is an impressive first book: well researched, carefully argued, and engagingly written. Hill posits ‘technological rhetoric’ as an original, interdisciplinary perspective on Technē’s Paradox. Grounded in thorough readings of rhetorical critique as well as science and technology studies, his longitudinal study of ‘machine rhetoric’ warrants attention both for the cases examined—from Malthus to the Unabomber—and for the individual and collective insights the analysis yields.”—David Henry, Sanford Berman Professor, University of Nevada, Las Vegas

Technē’s Paradox—a frequent theme in science fiction—is the commonplace belief that technology has both the potential to annihilate humanity and to preserve it. Advocating Weapons, War, and Terrorism looks at how this paradox applies to some of the most dangerous of technologies: population bombs, dynamite bombs, chemical weapons, nuclear weapons, and improvised explosive devices.

Hill’s study analyzes the rhetoric used to promote such weapons in the nineteenth and twentieth centuries. By examining Thomas R. Malthus’s Essay on the Principle of Population, the courtroom address of accused Haymarket bomber August Spies, the army textbook Chemical Warfare by Major General Amos A. Fries and Clarence J. West, the life and letters of Manhattan Project physicist Leo Szilard, and the writings of Ted “Unabomber” Kaczynski, Hill shows how contemporary societies are equipped with abundant rhetorical means to describe and debate the extreme capacities of weapons to both destroy and protect. The book takes a middle-way approach between language and materialism that combines traditional rhetorical criticism of texts with analyses of the persuasive force of weapons themselves, as objects, irrespective of human intervention.

Advocating Weapons, War, and Terrorism is the first study of its kind, revealing how the combination of weapons and rhetoric facilitated the magnitude of killing in the nineteenth and twentieth centuries, and illuminating how humanity understands and acts upon its propensity for violence. This book will be invaluable for scholars of rhetoric, scholars of science and technology, and the study of warfare.

“This is an impressive first book: well researched, carefully argued, and engagingly written. Hill posits ‘technological rhetoric’ as an original, interdisciplinary perspective on Technē’s Paradox. Grounded in thorough readings of rhetorical critique as well as science and technology studies, his longitudinal study of ‘machine rhetoric’ warrants attention both for the cases examined—from Malthus to the Unabomber—and for the individual and collective insights the analysis yields.”—David Henry, Sanford Berman Professor, University of Nevada, Las Vegas

“Merging insights from rhetoric, science, and technology studies, Ian Hill analyzes how weapons are simultaneously cast as harbingers of extermination and preservers of peace, revealing novelty and innovation in words about weapons across two centuries. Advocating Weapons, War, and Terrorism is crisply written, thought-provoking, and hauntingly important.”—Lisa Keränen, author of Scientific Characters: Rhetoric, Politics, and Trust in Breast Cancer Research

Ian E. J. Hill is Assistant Professor in the History and Theory of Rhetoric at the University of British Columbia and an affiliate faculty member of the Graduate Program in Science and Technology Studies.

From the Introduction, “Technē’s Paradox and Weapons Rhetoric

They will be obedient tools of destruction as long as the spirit contemplates destruction; and they will be constructive as soon as the spirit decides for great buildings.—Ernst Jünger (1932)But where danger is, grows / The saving power also.—Friedrich Hölderlin (1803)Technology will annihilate humanity—and technology will provide humanity’s only means of preservation from annihilation. This commonplace belief is what I call Technē’s Paradox. This technological and rhetorical paradox appears again and again in popular culture, especially in science fiction, like the Terminator movie trilogy (1984, 1991, and 2003) and TV shows like Battlestar Galactica (2004–9), Eureka (2006–12), and the revived Doctor Who series (2005–). In these science- fiction plotlines, technologies annihilate humanity and preserve it. They teach humanity that technology serves us until it kills us, and only what kills us can save us. Rhetorically, such narratives exhort humanity to take heed that its technological hubris will lead to disaster, and they exhort humanity to seek technological solutions for the most catastrophic problems. Technē’s Paradox, however, extends well beyond popular culture, permeating the rhetoric of people who ponder the advantages and disadvantages of myriad technologies in real- world, life- or- death situations.

Technē’s Paradox influences thought about a broad spectrum of technological dilemmas and their rhetorical deliberation. It undergirds the basic premises of risk analysis implemented by public policy- makers when deliberating the use of technologies vis- à- vis transportation safety, disease, and crime. It galvanizes environmental controversies about pollution, damming rivers, methods of agricultural production, and waste management. Fossil fuels and nuclear fission threaten global catastrophe for the sake of energy production, while wind and water turbines, solar arrays, and long- lasting batteries seem to offer the technological power to avoid or lessen such catastrophes. Technē’s Paradox animates assessments of capitalist consumer society and proliferates in descriptions of digital culture and futurism. It manifests when the stakes are not so high, and on the best and worst days, it reflects our exaggerated feelings about the most banal machines. On a hectic morning, the world-ending trauma of a broken coffeepot or a flat tire might make one overly conscious of how people depend on an assortment of “background technologies” for basic mental preservation.

From Hysteria to Hormones