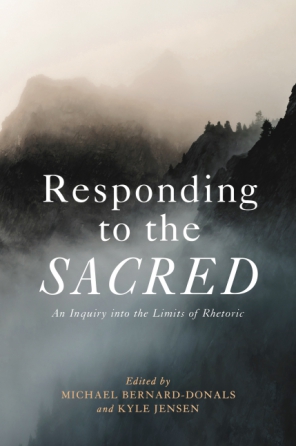 “Responding to the Sacred provides a capacious and prismatic view of communicating that which is not fully communicable, and in doing so, it ventures to rhetoric’s very edges—and beyond.”—Debra Hawhee, author of Rhetoric in Tooth and Claw: Animals, Language, Sensation

With language we name and define all things, and by studying our use of language, rhetoricians can provide an account of these things and thus of our lived experience. The concept of the sacred, however, raises the prospect of the existence of phenomena that transcend the human and physical and cannot be expressed fully by language. The sacred thus reveals limitations of rhetoric.

Featuring essays by some of the foremost scholars of rhetoric working today, this wide-ranging collection of theoretical and methodological studies takes seriously the possibility of the sacred and the challenge it poses to rhetorical inquiry. The contributors engage with religious rhetorics—Jewish, Jesuit, Buddhist, pagan—as well as rationalist, scientific, and postmodern rhetorics, studying, for example, divination in the Platonic tradition, Thomas Hobbes’s and Walter Benjamin’s accounts of sacred texts, the uncanny algorithms of Big Data, and Hélène Cixous’s sacred passages and passwords. From these studies, new definitions of the sacred emerge—along with new rhetorical practices for engaging with the sacred.

This book provides insight into the relation of rhetoric and the sacred, showing the capacity of rhetoric to study the ineffable but also shedding light on the boundaries between them.

“Responding to the Sacred provides a capacious and prismatic view of communicating that which is not fully communicable, and in doing so, it ventures to rhetoric’s very edges—and beyond.”—Debra Hawhee, author of Rhetoric in Tooth and Claw: Animals, Language, Sensation

“Each chapter of the book stands out on its own in delving deep into specific themes, while at the same time speaking to the other chapters and the introduction in a holistic manner. Here Bernard-Donals and Jensen’s editorial finesse shows—they weave one narrative while pausing at proper intervals to make space for variegated portals.”—Ankana Das, Reading Religion

Michael Bernard-Donals is Chaim Perelman Professor of Rhetoric and Culture at the University of Wisconsin–Madison. Focusing mainly on the relation between rhetoric and ethics, he has authored or edited ten books in the field.

Kyle Jensen is Professor of English at Arizona State University and the author of Reimagining Process: Online Writing Archives and the Future of Writing Studies.

Introduction: Taking Rhetoric to Its Limits; or, How to Respond to a Sacred Call

Engaging a Rhetorical God: Developing the Capacities of Mercy and Justice

How to Undo Truths with Words: Reading Texts Both Sacred and Profane in Hobbes and Benjamin

Hacking the Sacred (or Not): Rhetorical Attunements for Ecodelic Imbrication

Where Is the Nuclear Sovereign?

From the Cathedral to the Casino: The Wager as a Response to the Sacred

Rightness in Retrospect: Stonewall and the Sacred Call of Kairos

Historiography and the Limits of (Sacred) Rhetoric

The Rhetoric and Politics of Beginning Again

Rhetoric, Authenticity, and the Transformation of the Self