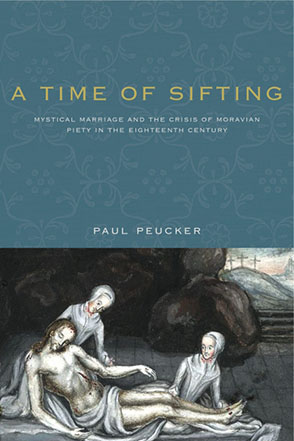 “Peucker’s account finds grounding in careful explanation of a wide range of topics central to the period—from salvation, justification by faith and eschatology to gender roles, gender identity and sexuality. More than just an exploration of the Sifting period, the book places the events of that period in wider historical context. As a result, the volume offers a chance for amateur and professional historians alike to deepen their understanding of the eighteenth-century Moravian Church.”—Heather Vacek, Moravian Magazine

At the end of the 1740s, the Moravians, a young and rapidly expanding radical-Pietist movement, experienced a crisis soon labeled the Sifting Time. As Moravian leaders attempted to lead the church away from the abuses of the crisis, they also tried to erase the memory of this controversial and embarrassing period. Archival records were systematically destroyed, and official histories of the church only dealt with this period in general terms. It is not surprising that the Sifting Time became both a taboo and an enigma in Moravian historiography. In A Time of Sifting, Paul Peucker provides the first book-length, in-depth look at the Sifting Time and argues that it did not consist of an extreme form of blood-and-wounds devotion, as is often assumed. Rather, the Sifting Time occurred when Moravians began to believe that the union with Christ could be experienced not only during marital intercourse but during extramarital sex as well. Peucker shows how these events were the logical consequence of Moravian teachings from previous years. As the nature of the crisis became evident, church leaders urged the members to revert to their earlier devotion of the blood and wounds of Christ. By returning to this earlier phase, the Moravians lost their dynamic character and became more conservative. It was at this moment that the radical-Pietist Moravians of the first half of the eighteenth century reinvented themselves as a noncontroversial evangelical denomination.

“Peucker’s account finds grounding in careful explanation of a wide range of topics central to the period—from salvation, justification by faith and eschatology to gender roles, gender identity and sexuality. More than just an exploration of the Sifting period, the book places the events of that period in wider historical context. As a result, the volume offers a chance for amateur and professional historians alike to deepen their understanding of the eighteenth-century Moravian Church.”—Heather Vacek, Moravian Magazine

“This fine book offers a welcome perspective on a complex topic, and joins the growing number of books on radical Pietism, in this case via new insights into the history of the Moravian Church and its global context.”—Annette G. Aubert, American Historical Review

“Peucker brings enough suspicion to his sources to allow for a compelling argument. It is the best theory of the sifting time to date and will likely prevail in Moravian studies.”—Jonathan M. Wilson, Covenant Quarterly

“[A Time of Sifting] illustrates the fluidity of boundaries, the wide-ranging intellectual influences, and the gender-transgressive potential within eighteenth-century Protestantism, and therefore is a strong contribution to the cultural history of religion in the Euro-Atlantic world.”—Alexander Schunka, H-Pietism

“Peucker concedes that his study has ‘only partially lifted the veil that covered the Sifting Time’, but we must be grateful that he has lifted it further than has any previous archivist or historian.”—Marsha Keith Schuchard, Blake Illustrated Quarterly

“A major achievement of scholarship that reads like a mystery novel. Paul Peucker solves the enigma of the Sifting Time and shows that this controversial moment is even more interesting than earlier historians have assumed. He reveals a scandal at the heart of the Moravian Church—brothers becoming sisters, as well as the antinomian belief that Christ had forgiven not only past but also future sins—so troubling to church leaders that they purged their own archives to cover it up. Although focused on one specific moment, Peucker’s study explains the forces that reshaped the Moravian Church throughout the entire eighteenth century.”—Scott Paul Gordon, Lehigh University

“Paul Peucker’s creative and skillfully researched new work sheds equal light on the enthusiastic history of eighteenth-century religion and on the complex way in which subsequent generations of Protestants have remembered that formative time in their past. His history of the Moravian Sifting Time skillfully interweaves theology, mysticism, the history of gender and sexuality, practical exigencies, and personalities. This volume will be important to historians of early modern religion both within and beyond German Pietism.”—Kate Carté Engel, Southern Methodist University

“In this fascinating study, Paul Peucker offers the first book-length treatment of a period of crisis in the Moravian community in the late 1740s, known as the Sifting Time. Previous studies have suffered from a lack of precision in their understanding of what constituted the Sifting Time. Features such as blood-and-wounds theology, as well as anything unusual or unorthodox, have been included in it. Peucker offers a new understanding, based on archival research and a close reading of Zinzendorf’s letter of reprimand in February 1749 and the writings of other Moravian leaders. He shows that to properly understand the Sifting Time, one must see it as a European and transatlantic story, part of eighteenth-century Protestant Christianity as a whole.
Focusing on events in the community of Herrnhaag, the main Moravian center in the 1740s, Peucker shows that the crisis of the Sifting was related to the idea of becoming sinless and to sexual transgressions. It was marked by the belief that union with Christ could be experienced during sexual intercourse, both within and outside of marriage. Peucker argues that the Sifting was the catalyst for Moravians in later decades to turn away from more radical beliefs and practices towards conservative, mainstream Protestantism. The Moravians changed from a radical Pietist movement to an accepted Evangelical denomination.
Peucker’s study is part of a new historiography that does not shy away from the dark side of radical German Pietism. Scholars of Moravian history are now focusing on issues of gender, sexuality, mysticism, and the less conventional side of Zinzendorf’s thought. Drawing on archival sources and the latest scholarship in the field, Peucker offers a new and authoritative interpretation of a crucial period in Moravian history. His book is now the indispensable reference work for understanding eighteenth-century Moravian communal life.”—Doug Shantz, University of Calgary

“No one knows the sources better than Paul Peucker, and the story he tells here of the Sichtungszeit is extraordinarily well crafted. Addressing long-held misconceptions, Peucker reconstructs from the surviving records a rich and at times startling account of this critical juncture in Moravian history. His book will change the way we look at Zinzendorf, the Moravian movement, and the role of radical religion in Pietism. His historical sensitivity and interpretive verve open new avenues for understanding religion and culture in the eighteenth century.”—Jonathan Strom, Emory University

Paul Peucker is Director and Archivist at the Moravian Archives in Bethlehem, Pennsylvania.

Chapter Six - Songs of the Sifting

Chapter Eight - Aftermath of the Sifting

Chapter Ten - What was the Sifting Time?

Community of the Cross